The first document of this monastic settlement is dating since 1571, when monk Laurentiu wrote 3 books and gives one of them which stated: "This book, Divine holy Gospel, was given by monk Laurentiu Cernogorat to the monastery from Partos devoted to the Archangels Michael and Gabriel, in 1571". In 1666, the monks sent by the Patriarchate of Ipe come in Banat for mercy and meet kir Stefan and the Priest Bratul at Partos Monastery .

The presence of abbot Kir Stefan shows that the monastery was well organized, had many monks and fulfilled its calling. The name “Kirâ€ť shows that the abbot came at the monastery from a greek one or as sender of the Patriachate of Constantinopol. In 1723, Austrian Banat map proves that Partos Monastery resisted to 164 years of Turkish domination.

The monastic life of Partos Monastery strengthens under Austrian domination. What happens to Partos Monastery  is written in a Gospel: "this Holy Book, useful for the soul, so-called Gospel, I myself the sinner servant of God, Hagi Peica give the book to Partos Monastery, where it is placed the body of Saint Vladica Iosif, dedicated to St. Archangel Michael, for our good, for the happy journey to the great city Jerusalem. I donate it to the monastery mentioned above and for the souls of Nedelcu familyâ€ť written in Timisoara, 1749, may 30.

In the eighteenth century, by Articles 47 and 50 of the Illyrians Rules of Viennese Court the Catholicism of the monasteries begins.
There are many monasteries in the Banat very connected Saraca, Sangeorge, Partos, Srediste, Zlatita, Voislovita, Bazias, Cusici and Mesici.

From the dispositions of Joseph II,reports on the abolition of monasteries are made including Orthodox Partos Monastery. On 10 November 1778, monks are forced to leave the monastery, and to move to other parishes: reeve Petru Popovici in his parish of Socen in Rank of Caransebes and other monks in the monastery Singiorgiu and Voislovita. Religious books and treasures came into possession of several churches including: Serbian Diocese of Varset (today in Serbia), Mesic and Sangiorz monasteries and parish from Bihor.

Partos Monastery shelters the relicts of Saint Joseph. On his tomb it was written in 1865: 'Sviatitel Iosifa novii bivsii Mitropolita Temisvarskii' (This book belongs to the Lord Metropolitan Joseph of Timisoara 1655). The text was continued a few years later: 'who willingly left the diocese, retreating in Partos monastery where he lived for several years and then returned to eternal rest, where the saints sleep '.

Between 1970-1980 numerous repair and maintenance works were held at the former monastery (abolished in 1775).
In 2008, on March 6, it is decided the refoundation of Partos Monastery, with destination for monks, at the initiative of the Diocesan Council. 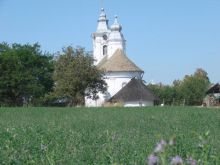